Providing a holistic overview of all proposals to help voters make an informed decision on Team Budget Request proposals.

This post will go over the Q1-2023 Team Budget Requests. By looking at the proposed funding we get a higher-level look at spending. We also revisit Q4-2022 budgets and evaluate outcomes based on reported carryover amounts.

All the data presented in the following post can be viewed in this presentation .

The calculations performed to get the numbers shown can also be reviewed in this sheet .

Special thanks to my friend @BRONDER for preparing these reports 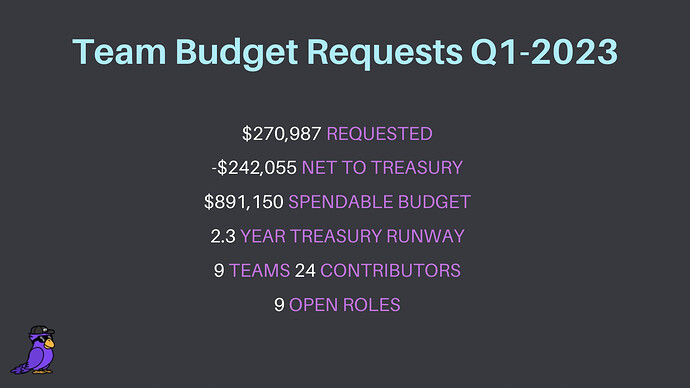 A 50% increase in the number of teams proposed, from 6 to 9. Those 9 teams this quarter are requesting $271k in funding. After accounting for carryover and returned funds we see -$242k net to treasury and a $891k spendable budget. Number of contributors up from 18 to 24 and with 9 open roles compared to 7 in the previous quarter. 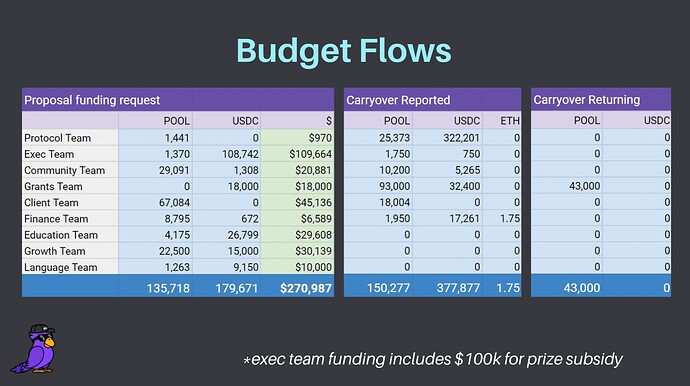 The Protocol Team reports a large carryover with a healthy budget for audits. Prize liquidity appears as the biggest request from treasury with $100k of the exec-team USDC. Grants scales down their operations and is mostly funded by carryover funds. The Client team is looking for a senior front-end engineer and has an allocation of POOL ownership to fill that role. The Finance team scales down and is primarily funded by carryover. Education, Growth and Language teams are new and total $70k of requested $270k funding. 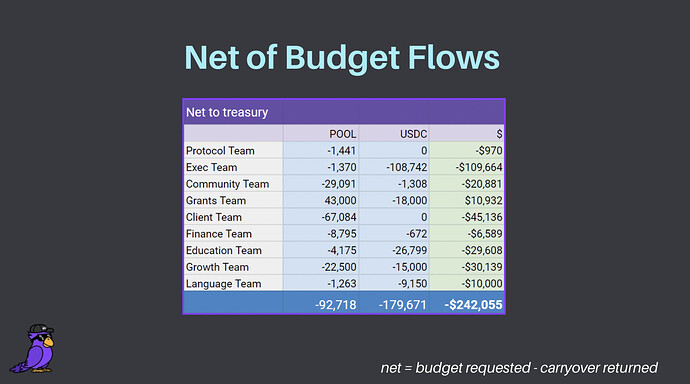 After accounting for the Grants POOL returned we can see the net to treasury. 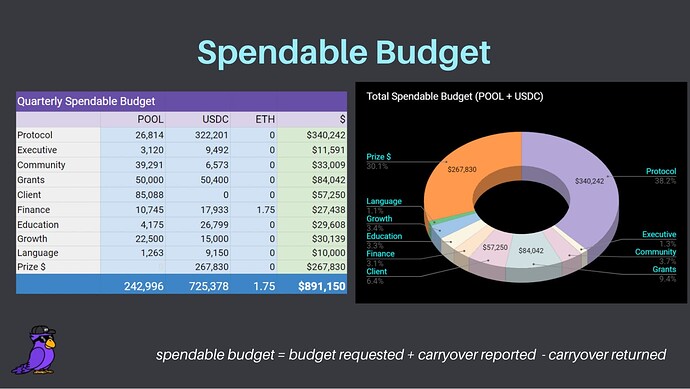 In order to understand the available funds for each team, we need to take into account the budget requested + carryover reported - carryover returned (note that non-spendable delegation is excluded in this accounting). Prize liquidity has been separated from the Executive-Team.

The 3 biggest spendable budgets are: 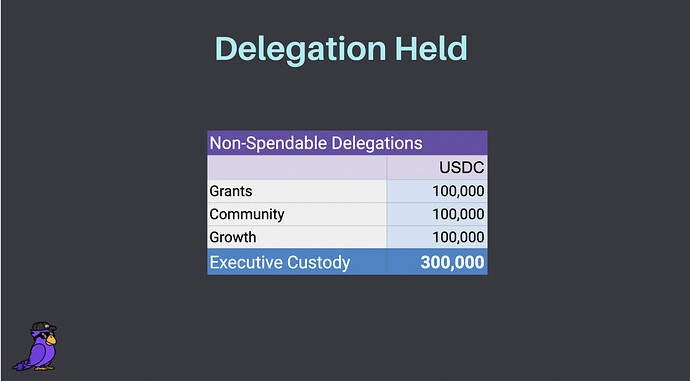 Delegation funding is all carried over from Q4-2022 (no new requests). Delegation is custodied by Executive-Team and represented by Growth, Grants, and Community Teams. 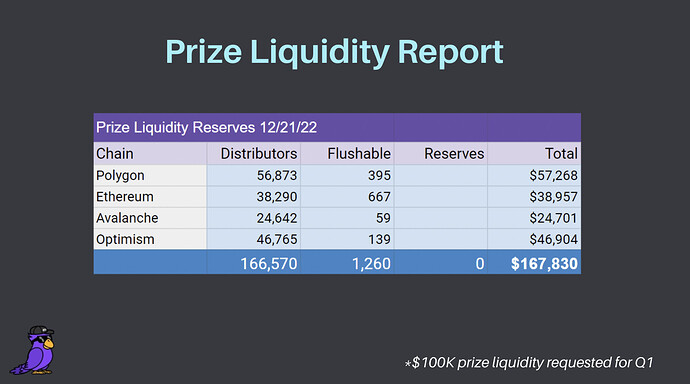 Current Prize Liquidity reserves show $168k in total as of 12/21/22. With $100k being requested by the Exec-Team to be added in preparation for bigger headline prizes thanks to the DPR upgrade. 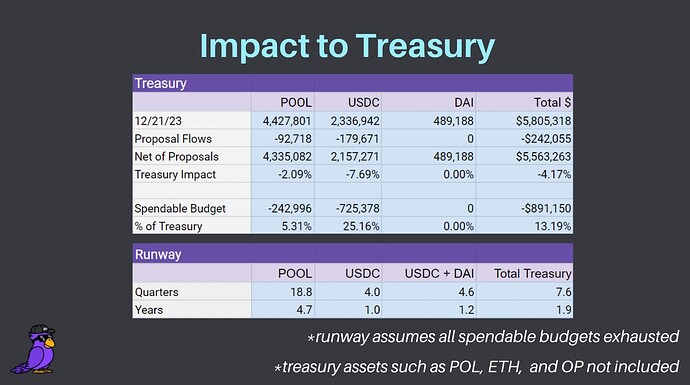 Taking into account the previously shown data, a maximum total of 5.31% of POOL and 25.16% USDC will be available as spendable budget from the Treasury. This means that the PoolTogether Treasury would have a runway of approximately 1.9 years.

The teams that have been included in the analysis are the following: 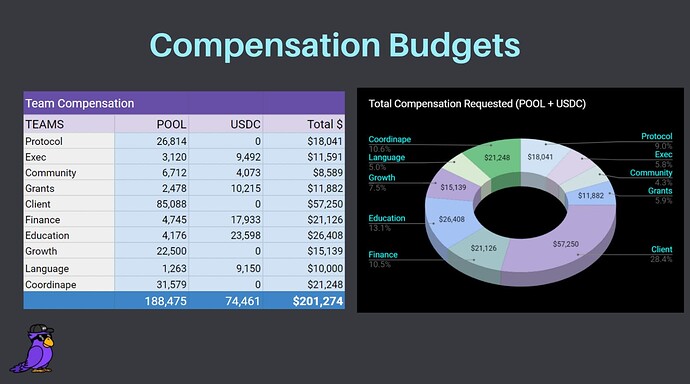 Looking exclusively at the compensation for team members, the top 3 teams are: 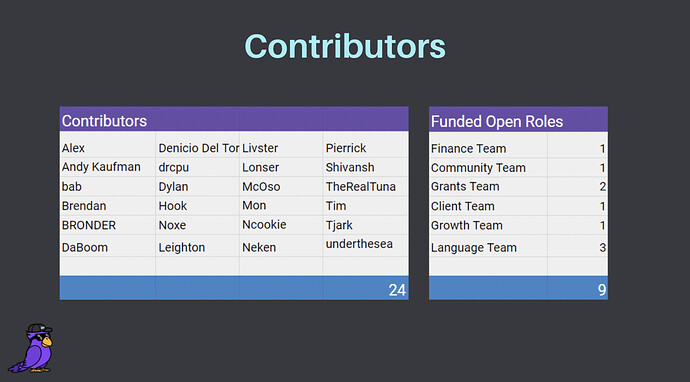 24 contributors are proposed across 9 teams. 9 roles are budgeted for but not filled. 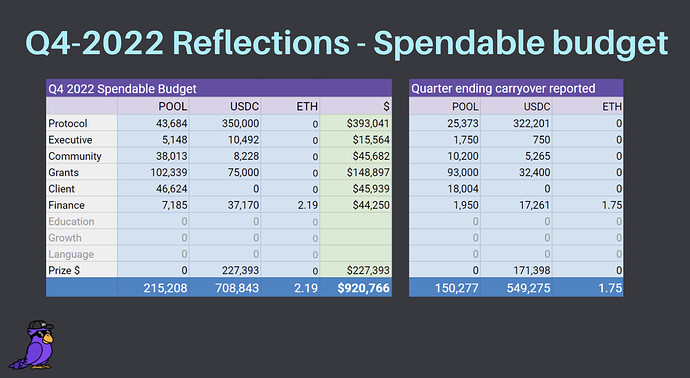 Here we see the Q4 2022 Spendable Budget numbers and teams recent quarter ending carryover reported. Noting that this was not a full 3 months from funding til now. 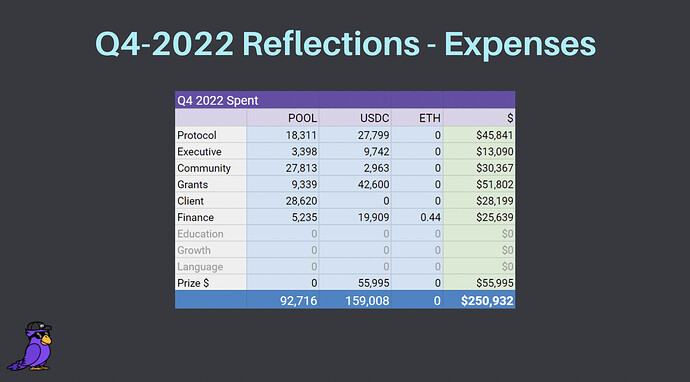 Subtracting the carryover from the budget we calculate expenses, or funds spent. The sheet shows individual team spending and a total for all teams of $251k. 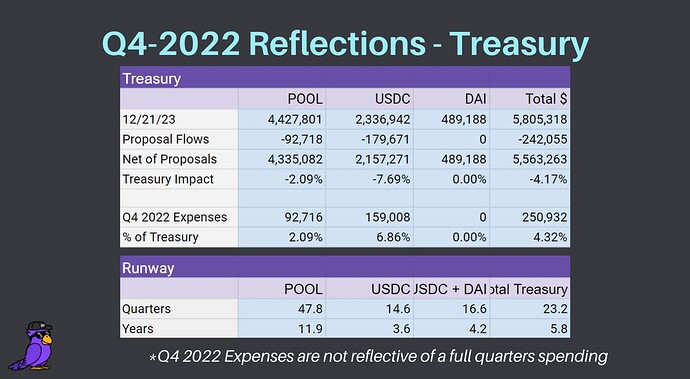 Using actualized Q4 spending we project a runway of 5.8 years. Noting again that spending did not reflect a full 3 months but is calculated as such. In addition some significant variance in spending is to be expected with large budget items like audits.

What is the plan with the prize liquidity?
I think during the council call, you already mentioned that it is not planned to spend the full $267k, and I know it is hard to make predictions with the highly variable yield from Aave and us not knowing how we want to structure the prizes in the future (+ not knowing how high or low our TVL will be) but is there a rough estimation how much you plan to spend of that prize liquidity?

Good question! We are hoping to implement a DPR prize distribution next month. There is no finalized plan of what that looks like yet so I’ll just throw some numbers out to illustrate an example of why it requires more liquidity to implement.

Another key consideration for prize reserves in relation to an infrequent prize is that the odds may not be on our side. Variance is to be expected. It would not be that surprising to target 1 prize in 100 days and get 2 or 3. So when budgeting liquidity and designing the prize we have to consider all outcomes of the prize machine.

Hope that explains our thinking and request for prize liquidity. As shown above we have spent $56k in subsidy over 11 weeks or approximately 727 USDC per day in subsidy. That is what the Finance Team has intended and I do not think we have intention of increasing that spending drastically in any sense. However we should anticipate more variance with a prize with less frequency and be prepared accordingly.