How Do We Capture Our Tailwinds?

Last Friday’s community call uncovered some phenomenal insight and generated some amazing discussion about the PoolTogether DAOs mission, organization and alignment, best captured, I think by this tweet: 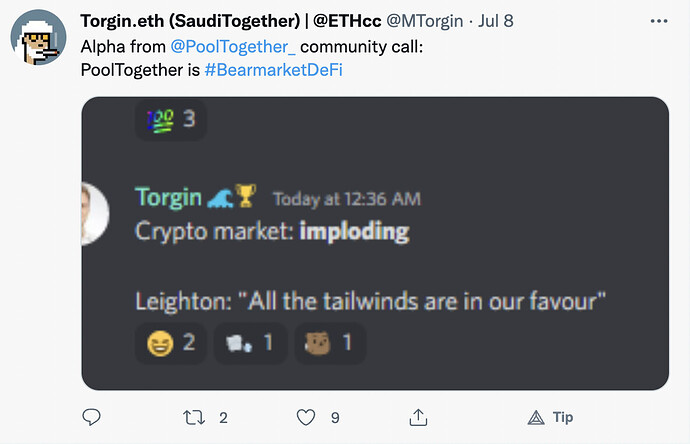 I am starting this thread in the hopes that we can continue the conversation started on the last community call, so that we can properly capture those tailwinds.

The way I see it, there are some very large questions that we as a community need to answer. This thread is my attempt to get alignment around the first question. The DAO vs. the protocol and what is success.

QUESTION 1: WHAT IS OUR ONE PRIMARY METRIC

Ycombinator, probably the most high profile incubator ever forces all of it’s founders to pick one key metric and hyper focus on it.

PoolTogether needs that one key metric. But there is a problem, PoolTogether is a protocol and not a startup. As has been suggested, protocols should not have revenues or P&L’s attached to them. Rather, the strengths of protocols should be measured in the ecosystem of applications, companies and users that integrate with the protocol to provide incremental services to its end users.

However, from at least what I have seen, the primary metric that the community seems to be rallying around is TVL. The problem with TVL is that does not properly capture a robust system of applications, companies and users. Instead, I would suggest the number of applications built on top of the protocol as the primary success metric.

If we use this, it obviously changes the conversation on growth, targets and objectives. But again, I am only providing a suggestion. I would very much love to hear the communities perspective on this.

The insinuation here is that the PoolTogether DAO was formed with the purpose of driving maximum usage of the PoolTogether protocol. This subtle, but significant distinction skirts the challenge of a protocol needing to operate without a P&L or defined revenue model, as the DAO can generate profit, build applications or even invest in alternative DAOs or companies that use the protocol.

The DAO’s key metric can be TVL, or number of depositors or some other metric. The DAO can also make investments with expected returns and SHOULD build a defined revenue model, even if that revenue model is currently not being realized (ie. we aren’t taking that revenue).

I believe once we start to get alignment around each, we can have an effective conversation about the future structure of the DAO/Protocol, the organization and what of the key opportunities outlined by @tim here, we should prioritize.

Short answers that I can make longer later:

QUESTION 1: WHAT IS OUR ONE PRIMARY METRIC

I really think it’s TVL. Other metrics fall under this one.

So you believe TVL should be the metric for the protocol, the DAO or both?

WHAT IS OUR ONE PRIMARY METRIC

I would agree with @tim that TVL is the #1 metric we are optimizing for. I very close second in my mind is “prizes distributed”. I like that metric because it’s possible for prizes to grow without growing TVL (by increasing yield). But if I had to choose one I’d still choose TVL.

Again, great question. And as I discussed on Friday, my personal answer is “yes”! But I think the problem is every person would say something different. To me, “PoolTogether DAO” is a short hand term used to loosely talk about any company or person contributing or building on the protocol. That is distinctly different from the protocol itself which is “a set of smart contracts that form a prize savings liquidity network.”

This is why I think from an organizational standpoint, now is a great time to actually formalize what we all mean by “PoolTogether DAO”.

is there s difference between the PoolTogether DAO and the protocol

Yes. The protocol is the system that lives on chain. The DAO is the humans building it, building on top it and building around it.

WHAT IS OUR ONE PRIMARY METRIC

While I agree that TVL isn’t quite what we want - I don’t think there is any other single metric that is better. I think either using TVL or having a collection of metrics would be the best path forward. Optionally we could have a simple forumla that adjusts & weights these individual metrics and spits out a single number to rally behind.

With V3 we seemed to be geared toward TVL and with V4 we aimed at users. A hybrid of those is probably our best bet in measuring success. @dylan s approach by weighing the metrics in a simple expression sounds like a great way to view this.

I too would love to see what a formula would look like. @dylan did you have anything in mind, or a starting point we can try to work from?

I’m a bit concerned because from both what I have read on Ycombinator’s advice and from personal experience. Once we start to consider a basket of metrics or a weighted average of metrics, it is extremely easy to mix priorities.

Ok, so now a really tough question. Since we have established that there is a difference between the PoolTogether DAO and the PoolTogether protocol, why do we have one token (POOL) that represents both the protocol and the DAO.

Furthermore, why are protocol improvements like v4/v5 done at the discretion of the DAO? Why should the DAO be responsible for bug bounties/the safety of the protocol?

If the purpose of the DAO is to build a thriving ecosystem of applications and users of the PoolTogether protocol, shouldn’t the DAO be taking the protocol as an input, then looking to add value on top of the protocol in the service of building a robust ecosystem of end users?

I appreciate these are very difficult questions and there is no right answer. However, I think it is extremely important to confront them as a community so that we can align on the best structure, accountabilities and growth for the PoolTogether DAO.

And I think the goal is that the DAO will ultimately service and promote the protocol to the point where there is no need for Inc.

Where is the lie?

Is that the purpose of the DAO?

Since we have established that there is a difference between the PoolTogether DAO and the PoolTogether protocol, why do we have one token (POOL) that represents both the protocol and the DAO.

We don’t. The POOL token represents and controls ONLY the Protocol. It has no control over the companies and people contributing to the protocol. For example, we can not have a POOL token vote to tell Zapper to integrate with the protocol… I mean, we could, but it would be meaningless.

“PoolTogether Governance: A governance system for governing the PoolTogether Protocol, enabled by the POOL token.”

Again, I’d say as of today, there is no “PoolTogether DAO” – that’s just a short hand phrase people have been using to describe the community around the protocol. But there has never been any official vote by POOL token holders to set one up or designate it, etc.

Furthermore, why are protocol improvements like v4/v5 done at the discretion of the DAO?

They are not. V4 was voted on. If V5 happens it will be voted on before it happens and won’t happen if that vote does not pass.

Why should the DAO be responsible for bug bounties/the safety of the protocol?

I appreciate these are very difficult questions and there is no right answer. However, I think it is extremely important to confront them as a community so that we can align on the best structure, accountabilities and growth for the PoolTogether DAO.

Again, to me, the key issue here is that there is no formal definition of what the “PoolTogether DAO” or what it’s purpose is. Right now it’s a catch all phrase that is thrown around and means different things to different people. I think formalizing this by having POOL token holders vote on 1) what it is, 2) how it’s structured and 3) what it’s goals are. Is the right next step now.

Once we start to consider a basket of metrics or a weighted average of metrics, it is extremely easy to mix priorities.

Exactly why I didn’t propose anything further

Determining what those metrics are and weights for each is extremely difficult and effectively setting those priorities (ex. weighting TVL more than number of unique depositors prioritizes TVL).

I’m kind of going in circles trying to suggest something. We want a metric that is affected by efforts of all teams within the DAO and correlates with the “success” of the teams (ex. marketing is successful, number goes up). I keep ending back at yield captured on deposits or just TVL for a top level primary metric.

Both of these correlate well with what I would deem as “success” for the different teams (ex. success with marketing → TVL & yield captured increase, success with protocol development → TVL & yield captured increase) but they have some subtle issues (ex. Having yield impact a primary metric incentives riskier yield sources). There’s also no clear differentiation in a case like $1m in deposits earning 10% APR vs $10m in deposits earning 1% APR - which is better for the protocol?

Good discussion on protocol vs DAO. I was definitely using the term protocol loosely in the past, and this discussion, both on discord and the forum, has changed my perspective.

I think we do have a “PoolTogether DAO” so I’m curious to hear more of what that could mean in a more formal sense.

TVL is a good primary metric to focus on. Ideally I think that “prizes distributed” as Leighton suggested is our special focus, but right now it is quite muddied by subsidy. We could look at “prizes generated”. Thinking from the perspective of the protocol; I think creating prize value may be top priority.

I like the idea of prizes generated, but I worry that it creates too much ambiguity. Ie. If we created prizes generated as the metric that we use to measure success, we would naturally just create all $1 prizes to call ourselves ‘successful’.

However, I really like the idea of ‘interest given back’ because it is a function of two separate things:

Yeah, exactly. I called it prize value generated in the other thread. In some instances we may not actually “give it back”. We might award the treasury with a prize in the form of a reserve on yield generated. Or some other diversion of a percent of the yield as a prize for public goods. Maybe stretching it to call these prizes, but prize is so core to the mission I feel it should be included in titling the metric.

My concern with using “interest given back as prizes” is that it’s just a constant number that the governance sets. It becomes more of a representation of an action the DAO has taken and less so a representation of the actual health of the protocol itself. Want the metric to look good? Give away the entire treasury next week. Want it to look bad? Stop giving out prizes.

So what if we just change it to total interest earned?

Total interest earned values high risky yield over smaller safe yield, I think that’s getting closer to what we want though. We had some good talks last week in person around the flow of money being the core metric. @Brendan could probably elaborate more