RFC: What Is The PoolTogether DAO?

As @Leighton mentioned in How do we capture our tailwinds?

I have heard others say that we do actually have a ‘DAO’ but it is loosely defined. I think it is extremely important to have this conversation as a precursor to @Leighton’s 1,2 and three points above.

So, let’s get ultra-clear on what we have, what we need and how they ineract with eachother

Any changes made to the protocol must first be approved by POOL token holders before it is implemented. Compensation for any changes to the protocol are either self-funded (PT Inc.) or funded from the PoolTogether protocol treasury, via bounties.

THE POOL TOGETHER CHALLENGE

We aren’t investing our efforts encouraging a robust community of applications. Instead, we seem to be focusing our efforts making it more attractive for an end user to deposit.

At a minimum, we need to identify the conflicting objectives at play here:

Another consideration is spinning off these tools into sub-daos with a clear mandate to maximize usage of the tools in a self-sustaining way (create a revenue model that pays for sales, marketing, operations, product improvements, even if the revenue model is turned off and they are funded by the protocol to start with). 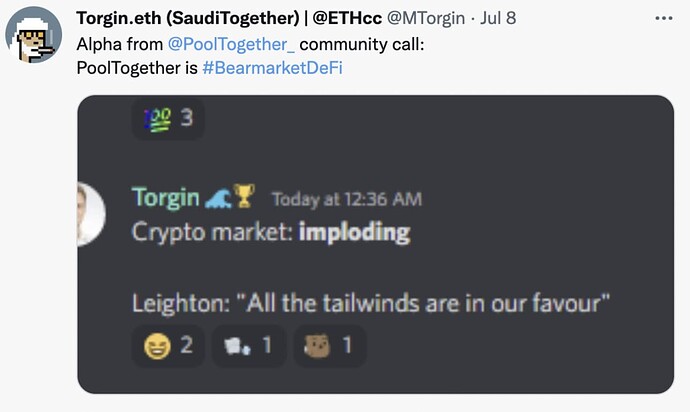 PoolTogether is in the perfect position to make a big bet on growth. But PoolTogether is spoiled for choice. There are too many great opportunities to take advantage of. However, if we chase all of them, we will experience small wins, but we wont have the money, the human capital nor the operational bandwidth to succeed at the scale the PoolTogether protocol deserves.

BUT if we align around one big bet, and put the power of the PoolTogether community, the resources of the treasury and the reputation of the protocol towards it, there is no way we fail.

SO WHAT IS THE POOLTOGETHER DAO

I agree with @Leighton. The PoolTogether DAO needs to define what it is, what it wants to achieve, how it’s going to achieve success and who is going to help it do that. We need an open discussion to get there.

I have provided some thought starters and an analysis how I see it. I have done this without consulting anyone, but because I know PoolTogether is destined to be the DEFI leader that solves savings. @Leighton @Brendan and @chuckbergeron started something big. Its on us to help them realize their potential.

So, I ask you, WHAT IS THE POOLTOGETHER DAO?

What is the PoolTogether DAO?

To me the DAO always was the sum of all formal working groups and people that contribute to the protocol (taking action governance, doing meaningful work, voting on proposals).

It is the group of people that take action in governance and govern the protocol with the POOL token as its governance token.

What protocol and governance mean in our context have been defined before:

I fully agree that now is the time to make a move and wrap some of these up!

The beauty of blockchain is that it actually doesn’t need the app. Users can deposit and withdraw via SmartContract - even if the website would go offline.

I believe Zapper and Coinbase could unlock lots of additional users, too, if they integrated PoolTogether deposits (and Prize Notifications).

@Leighton @Brendan and @chuckbergeron started something big. Its on us to help them realize their potential.

While I agree that mission and values are important, I actually think we are much closer to those than we think.

What, at least for me, is missing goes a little deeper:

As I mentioned above, right now, it seems that we have ‘huge eyes and small stomachs’ meaning there are so many large opportunities we are chasing, all very good, but we don’t have the resources, nor bandwidth to support them all.

If we can align around one strategy, at least at first, then we can make our ‘big bet’ properly and set ourselves up for success.

Those are all legit questions - but it feels like we are trying to answer these in the other ongoing discussions already?