I see that the “problem” with whales winning the prizes frequently concern a lot of people.

My thoughts for this problem would be to gather few liters of water in the ocean to fill a little pool, or at least a fish tank, to try to equilibrate the process, without hunting the whales.

As it was said before, they participate a lot in the ecosystem, prizes growth and attractivity of the protocol; it would be damaging to prevent big investors to enter.

A fair compromise, for me, would be to keep a percentage of the interest, let’s say 5%, to fill another prize pool, which is not correlated to the number of tickets, but only to the addresses who enter.

Now, lets run a lottery to win the 5000$, where each adress represents 1 entry, independently of the assets it holds.

With this scenario, we dont discourage the whales to participate, as their prize is lowered by 5% only. Splitting on several addresses is always a possibility, but the advantage to do it is consequently reduced.
And we add the possiblity to all acounts to win a reduced, but consequent price. The impact of 5000$ on an address who holds less than, let’s say, 1000$ is not the same than on a million dollars address.

That means there’s 3880 players with a balance under 1000$ at the moment, 88% of the players.
These players represent less than 10% of the entry tickets.

I think this two-sided distributing system could be a great thing for all the players, as big winners would lose small, and small winners would win big.
It would also reward a little bit more the 88% of the community that participate in the protocol.

As only 1% of this planet population have a net worth of a million dollars, the little fishes are the one who inhabit the seas, proportionally speaking.
Talking about mass adoption, there will be more sardines than whales involved in the protocol.

This also could be an important factor to incite them to swim with us.

I took 5% arbitrarily for the demonstation, but evidently it can be adjusted at the will of the community.

I can’t wait to hear your thoughts about this idea! I love this community and this concept, and i’m glad to see so many people involved in the governance (despite the lack of delegated votes).
I will try to be here for the next community calls on Discord, if you want to discuss all of this!

Oh, and if we finally think to implement this feature, I propose “The Fish Tank” to name it. 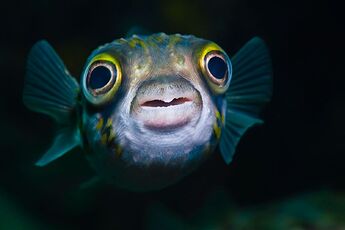 I think it will be important to implement a fair pool at some point. Something along these lines could work. My hope is down the road after growing the treasury and the pools we could implement something like this. Hopefully we can do it in a way that prevents whales from using multiple addresses. I like the name!

I was also thinking that a “small fish pool” would be nice, but that could do the job.

I think this is awesome! @TheRealTuna i don’t know if that small amount would be worth it for whales to take the time to make multiple wallets. It’s not much money to a whale but it’s a meaningful amount to 90% of the players.

The fact is that multiplying wallets to try to get this “Fish Tank” prize, means creating A LOT of adresses : to get 1% chance to win, you would have to enter with 44 adresses, at the moment.

Multiply this by the amount of gas fees you need to enter, and you have an expense of at least 1000$. To get 1% chance to win 5000 dollars, it wouldn’t be worth it.

That’s the advantage of this solution!

I think the PoolPower pods coming soon will mostly solve the problem of “small fish never winning”, as the small fish can choose to combine into a larger one and increase their odds of winning.
This will lead to keeping the prizes fair for all participants while solving the perceived problem.

But, will the prizes be as attractive as today?

That’s a nice thing to have, as people could enter with small amounts and win small amounts. But i think it’s important to keep the “Wow” effect, betting 100$ to win 10$ loses this.

If the Euromillions for European countries, or Powerball for USA, attract so many players, that’s because of low ticket price, and big prize!

i still think this would be a nice side pool. your odds to win would be much better because its based on addresses not tickets. if the fish tank prize is 5 grand or even 2 grand thats a nice come up and it doesnt really hurt the main prize.

Not a bad idea. I think also perhaps that a limit on the odds of a whale account winning could be implemented. Lets say a whale has 1million in the dai pool. He is already being rewarded with the pool token for holding his funds in there. If a limit on the qualifying amount of dai was implemented, regardless of the amount in the account then this would even things up a bit. For example, if out of the 1million dai only 50,000 or 100,000 would be entered into the draw then at least others have a better chance of winning and yet at the same time the whales have their rewards still coming in. Just a thought.

But the POOL rewards wont last forever… It can be a temporary solution, but as soon as the POOL distribution ends, all the whales will withdraw from the pools to seek yield elsewhere!

I didn’t realise that. If the pool token rewards are to end, then what utility will they have. I think that would be a big mistake to end the token rewards as they are a great incentive. What are your thoughts?

The token rewards will most likely not end. They will however be significantly reduced. Right now the utility for POOL is governance only. I do agree that adding utility in the future is important. I have one idea that I posted here Retaining players

Yes it’s an incentive, but finally I think the protocol must be attractive without it to last! The 1st point is the lottery, with a solid system we can make people stay just for this! With Matic it will be a lot better since people will be able to throw 2$ in the pools if they want.
But I love @RegisIsland ideas with yield redistribution and accrued yield for HODLers, as it can help people to enter, without being the first reason for the people to come.

Awesome thoughts Charly! This will keep smaller investors motivated too.

Hey @ChALx2 interesting idea to take a % cut of every pool and distributed it more fairly. I authored a post that shares the same idea with a different approach, PoolTogether Jackpots. Instead of redistributing that cut every week, it could accumulate to a really massive prize that is 1) really lifechanging and 2) attracts media attention. Check it out, maybe the two proposals can be merged in some form.