Note: The percentage can be another proposal in case majority oppose. 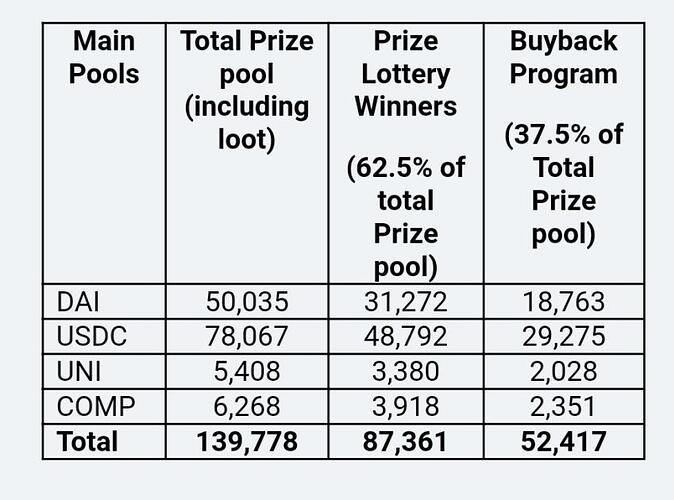 Some arguments already discussed in discord :

Like i said in Discord, parceling up rewards to maintain / inflate the POOL price is not good optics for the wider users of POOL and i think will push more users away in the long run. People just see that as “Well, POOL holders are taking my interest and giving it to themselves”

We should be very wary of scalping the prize pools themselves to fund other mechanisms of the PoolTogether protocol. The POOL token should be in its purest form, a token of voting rights, not a token that generates value through ownership stake in the protocol and its proceeds. I get where you are coming from, there should be incentive other than voting to hold POOL, but i think over time people will find that the voting power in itself is extremely valuable when the protocol grows and the token price will reflect that.

We dont need to force POOL value accrual mechanisms from the prize pools at this early stage. Other protocols do that and I always felt it was a bit usurious.

Price is secondary, the main is trickling some of the prizes to pool pool depositors or holders who can be long time holders.

I will not support this proposal too.
I don’t think buyback is the good way to incentive token holders
And hoping that this buyback will lower the supply and increase the value of the token has already been tested by other projects and failed

Building a treasury reserve makes Pooltogether stronger and gives it value. Just buying back POOL only creates artificial value. I would not support this proposal. I would maybe consider a buyback later on if it was to help extend liquidity mining but there is no point at this time.

Although this is an interesting idea I do not find it necessary at this time. Even if 37.5% is an arbitrary number I believe having a constant buy back on POOL tokens does not support or foster organic growth. Would vote against.

I unfortunately do not support this proposal. I appreciate you putting it out there though

I think this is a very interesting idea. I think 37.5% is way too high and I feel like this is just taking my interest and diverting it to the POOL pool. Which I don’t hate, but I don’t love it, it’s like a stock buy back that only benefits the insiders.

I certainly feel like some sort of buyback item could be entertained later in the life of PoolTogether but now seems a little early to inflate the price of POOL. This might be something that could be triggered if the reserve gets to be excessive, and then a % of the reserve could be used. But it still seems like an odd buyback mechanic.

The discussion this is providing is highly valuable.

guys this is not the traditional buybacks that treasury keeps or burn which reduced the circulating supply. The pools are to be distributed to the loyal holders. The main focus here is keeping smaller holders that is here for long term by incentivising a small amount from the service that POOL offers to its customers (farmers).

In fact this is a great alternative for dripping POOL to POOL pool from the treasury which is being suggested now in the community. Maybe we can use funds in treasury for something else, ex grants, partnership etc better than drops.

And so far only 2 arguments here i see, 1st is buyback is not good by experience but as i mentioned it is not traditional buybacks and 2nd whales will not be in favor which of course not determined, maybe 37.5% is bit high we can negotiate.

Thanks all for the feedback.

This might be something that could be triggered if the reserve gets to be excessive,

This was what i was thinking too. Its not an awful idea, but its maybe a bit too early. Maybe we could vote when the reserve gets above some amount. No point in having a reserve that just inflates in perpetuity and we dont use the excess to actually do something.

@fxams I think this idea has some weight to it in future. It would be cool to have advocates who continue to push their own particular idea for the betterment of the protocol. I’d continue to work on it and maybe adjust how you think the mechanism would work and the amounts and maybe it will be more palatable to everyone.
I definitely think that down the road the community will be ready for something like this, maybe once governance is more mature in general.

I don’t see the benefit of doing buybacks to fund the POOL pool over dripping rewards from the treasury.

dripping rewards from treasury exacerbates the release of supply in circulation thus fast inflation for pool which is the case now where supply faster than demand.

with other proposal of 200pool/day from treasury for dripping pool pool, its only about 8.5% of prize at this time which i think whales wouldn’t mind.