Three weeks have passed since the new prize distribution went into effect. With the addition of OP incentives today it is a good time to look at the data thus far. This post takes a look at network TVL, claimable prizes, winners, and the impact on specific networks, as well as a continued evaluation of the goals and outlook of prize distribution.

With total network TVL relatively consistent we can look at Claimable Prize to deduce impact on treasury subsidy.

Following chart shows claimable prize trending down with an increase in variance due to the bigger grand prize and smaller total daily prize value.

Following chart shows the winners per day increases with more prizes in the daily distribution. 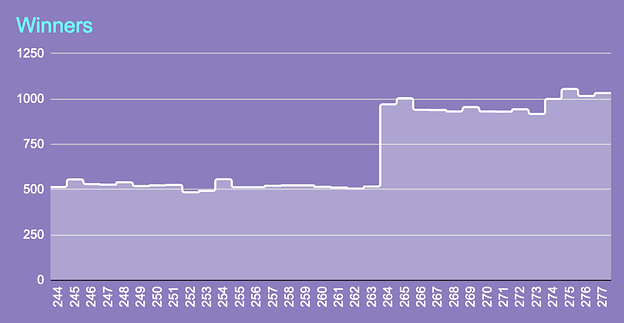 The chain specific prize tiers have shown to improve Ethereum experience. This chart from Ncookie’s stat site shows that on the week of the PTIP passing Ethereum saw the most deposited value on V4 to date. 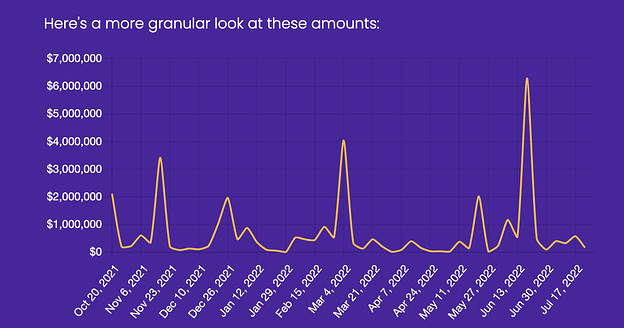 The majority of other migrations on the network have focussed on Polygon where depositors have been driven to move by the hype of Optimism rewards. With the re-introduction of $1 prizes on Polygon it is likely some bigger Poolers have left without knowing the other prize distributions have been designed more to cater to their size. Better messaging for chain specific prizes could help Poolers understand where they fit-in, like a message for those withdrawing on Polygon that reads “tired of $1 prizes, try $69 prizes on Optimism today! Plus OP token!!”

At the same time the relatively large Poolers on Polygon who have remained have contributed to more dropped prize value. This value can be carried over to award other Poolers. Net positive for the protocol.

Based on a July 5th implementation of PTIP-76, the initial goal of $20 million in growth in 8 weeks time targets the first week of September. The goal aligns with the Optimism incentives target of $25 million in growth in the next 3 weeks. $5 million of the growth on Optimism is assumed to be existing Poolers migrating from other networks. New growth is key to our success and will show in the growth of network TVL.

Please share your impression of the impact of PTIP-76’s prize distribution, both from the protocol perspective and from the perspective of being a Pooler.

This is an awesome summary. I think from the protocol perspective everything is looking great. TVL is maybe moving a tad slow pre OP by those number but i think we’ll get there for sure with the increased uptake.

From a depositor side I’ve quite enjoyed the Polygon changes. I got a few 1$ prizes before migrating to OP and quite enjoyed the fun of the increased frequency. I think i’ve seen chat on the reduced frequency and reducing the 1$ prizes. I’m sure in coming weeks when the prize team starts tinkering we can start to see the impacts of these changes. I think experiencing a few different iterations is probably required to get a real feel of the communities preference. But so far I think this is better.

On the OP side i think it is still early days. I’m feeling like perhaps a lower tier of prizes could be nice. Like i said above i think a few iterations of different prizes an optimal solution will come out eventually.