POOL depositor distribution started 2 weeks ago and has had a massive impact on total deposited funds. Growing from ~$5 million to ~$100 million in 2 weeks. The initial deposit disbursal period was set to run for 14 weeks by the following allocations: 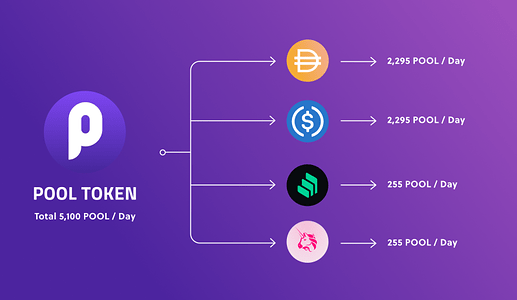 A few observations about this:

That provides the background, now let’s look at what we’ve learned since launch:

My proposal:
Ideally, we want to be 1) distributing ownership to users who are long term aligned and invested in the community 2) have a distributing program that runs for a long time and 3) change the distribution program as little as possible so people using the protocol have assurances.

However, early on it makes sense to aggressively make adjustments to 1) understand how the market responds and 2) optimize for the intended goals. With this in mind, I would propose we:

2). Remove the time countdowns from the UI, signaling that the distribution is intended to run perpetually

3). Create a separate proposal to divert 1,000 POOL per week to a prize pool for POOL holders. This is more likely to have the intended effect of giving more POOL to the people long term aligned.

Once implemented, we can also make another adjustment quickly if it does not have the impact we desire!

Oh my… I was so happy to see that much tickets in Pool, damn, this is the problem we need to solve first

I think to reconsider the way of distributing the reward because if we take a look at the pools you can expect (I mean for a « normal person » ), it’s not significant at all. If you place 1 000$ on Pooltogether, the reward is quite low and I am not sure it’s something who will push people to make deposit on Pooltogether.
On the other hand, I am a bit worried with the whales. They will only bring token price down. As you said, they just mine and withdraw. Or what will happen after the end of this airdrop in 14 weeks? Even if a whale decide to hold until the end, please get prepared for a huge drop in 14 weeks…

This seems like a really good starting point to start tweaking liquidity incentives to ensure that we have alignment in the expectation of depositors with that of long-term POOL holders.

Crypto protocols seem to be thinking about finite gamification mechanisms, incentives and lifecycles - we should really be thinking about imbuing these with a sense of the infinite; as opposed to thinking of winning, I believe it is in the best interests of POOL holders to think about sustaining; this is the reason why I really enjoy @Leighton’s notion of making the distribution last for a long time. It might be good to see the impact of reducing distribution speeds in a measured manner + also having the flexibility to get relevant data points on distribution speeds that could be used towards building up a more comprehensive and nuanced method of adjusting liquidity distributions.

At least, what about offering the possibility of staking your reward ? The more you hold and the more you get. Opposite side, if someone decide to mine and withdraw just after that, you apply a big fees.
Fees being shared by honest holders !

POOL for POOL holders! How’s this additional pool work? Is this just a new Prize Pool that needs deposits or something built over the top of existing Pools - I’m active in over Pools so I’m eligible for this distribution?

Keep the POOL with those that believe in the protocol, heck yes! Also all for keeping the POOL dispersing indefinitely and at a more equal rate for that various pools.

I support this proposal. this will decrease the amount of POOL that is being dumped by whale liquidity miners.
a treasury sponsored POOL pool will create some demand for the token. It will incentive longer term hodling.
I think it is important to enact this as soon as possible to prevent more tokens from being dumped onto the market.

One downside of lowering POOL distribution is that whales will withdraw from DAI and USDC Pools, so we should expect a significant drop in prize value.

That being said, it seems important to me to continue to distribute POOL tokens for the years to come, this way we can expect people joining the Pools to start getting involve in governance, even if they receive a small amount.

It will be a good test to see if smaller tickets holder will stay in the Pools despite a lower prize value.

When you think about it, PoolTogether is the only lottery where you don’t lose money and can vote on the protocol’s future!

I agree with some parts of this proposal but I think the reduction in USDC and DAI pools is too extreme. I would propose a much smaller reduction to these pools or even wait and see how things go after the creation of the POOL pool. If we can create more value for POOL it should solve this problem, don’t agree with taking away incentive on the top earning pools.

i understand your reasoning, however if we create a pool pool at current distribution levels then the whales will just dominate the pool pool as well because they will have so many tokens.

I definitely agree we may see a large outflow in capital BUT I’m very interested to see what actually happens. I think what I really want to test here is HOW much do deposits drop?

As I mentioned in the post, UNI already only distributes 255 per day and it’s 50% the size of the USDC & Dai. We are cutting the POOL by about 85% but I don’t think AUM will actually drop that miuch. So that’s why I think going to a much lower amount will be a great test for us and if it’s too low, we can make another adjustment.

its the perfect idea !

Clearly the POOL award led to a spike in the pool deposits and in return the prize pools - this result is very good for the protocol and in theory should lead to increased attractiveness of it. However, the number of players barely increased. I count roughly 300 players during the last week. The pull factor for new players has remained limited despite the high prize pool. One can argue that the entry barriers have been quite high due to the enormous gas fees, however there were time frames when gas was relatively low, allowing even a player with “only” a four digit sum to enter the pools are reasonable gas costs.

Therefore the risk of losing the marketing effect of high prize pools appears worth taking for a certain time, and as you point out this move is not viewed as permanent but can be adjusted fairly quickly afterwards.

The behavior of few large liquidity miners - precisely to mine and dump - is not what the POOL rewards were intended for. If they would mine to keep and use in active governance that would be a different thing.

Therefore I would support the proposal to reduce the size of POOL allocation. I still believe that the stablecoin pools should receive an overproportionate allocation versus the other pools given their “no loss” labelling and idea towards the target group (“savers”). I would argue for setting the rewards to 1,000 POOL/ Day, which would be less radical than @Leighton 's proposal.

One issue that really bothers me: It is really a shame that no single governance delegate managed to gather more than 10,000 votes and thus is able to submit governance proposals. All four holders of more than 10,000 votes are only representing themselves (which isnt bad) but still I think that there should also be a representative of several voices. The largest number of votes representing several wallets so far is @0xSiam with 4 token holders represented and only 4,121 votes.I do observe very active governance participants and contribution of really good ideas, so do I notice honest interest and commitment from many people. Therefore, I would propose to implement an extraordinary airdrop, rewarding delegates and users who were willing to take the 20$ gas cost to support PoolTogether governance. This would support reaching the 10,000 voting threshold because the recipients will likely not dump their POOL tokens but hold and further allocate to their trusted delegate. As a number I would propose 255 POOL, representing the daily rewards of the UNI/COMP pools. At current gas costs I dont expect abuse of this in retrospect and propose that everyone is eligible who is a delegate or did delegate up to and including 2nd March.

Gabor, thanks for bringing this up. I’m also bothered by the same thing. Our intention with the distribution was to give away so many tokens that it would be very easy to create proposals but it seems many people either don’t understand or are too apathetic to delegate them.

I would support a proposal like this IF it was somehow implemented in a way where these newly airdropped tokens were locked for a period of time. We may also consider doing something like this (UMA KPI Options and Airdrop. UMA will be airdropping a new… | by Hart Lambur | UMA Project | Feb, 2021 | Medium) I don’t know exactly how it works but it’s suppose to be a way to only distribute tokens if certain thresholds are met.

That’s my two cents. I’d encourage you to branch that last paragraph into a separate proposal.

Thanks Leighton, will branch it out. The UMA one is interesting although I like to keep it simple and stupid and wouldnt link an airdrop to TVL in PoolTogether but rather get those votes out (with timelock) so governance participation gets a push.

Also @gabor to directly address your suggestion of 1,000 per day. I think that is still far too high. I’d like to have something that is sustainable, 1,000 per day would be 3650 per year which would be 3.65% of total token supply going to one pool in a year at a rate of 255 it’s 93,075 per year or 0.93% of total token supply. It’s still a lot but it is much more sustainable. Between four pools that would be 3.72% of token supply per year which is aligned with other major DeFi protocols

Adding the POOL pool starts to solve the problem by giving users more POOL for depositing their POOL. I think this is only a short term fix. The longer term fix is starting to collect revenue from the pools ASAP. If we decide on a percentage to keep we can have that revenue start going to treasury and then later determine how we want to use those funds and use future revenue. Seeing the platform taking revenue will make holding POOL more attractive as users can assume more future rewards to holders.

I think you grow the concept then worry about fine tuning governance. If people have no reason to come check the idea out, governance won’t matter. I think it’s still early to say that the pool investment won’t continue to grow…

a vesting period for a second airdrop would be good. I agree with your math below too. 1000 pool is still too much. need to make the treasury runway as long as possible without compromising growth.

Even if all the whales left Dai, it would just bring the equivalent USD balance to be roughly what the UNI USD balance is, so it’s not too scary I don’t think.