Following PTIP-61 and concerns expressed over the value held by the protocol’s treasury being higher than POOL’s market cap, this proposal seeks to deposit POOL tokens on a Bancor POOL pool.

This proposal is contingent on POOL being whitelisted and space created for a single-sided stake to be added. Should the proposal be well-received and POOL meeting all token requirements set by our DAO [1], I’ll draft a proposal to whitelist POOL on Bancor and create the space needed. Our DAO process generally takes between 1-2 weeks between discussion, voting, and proposal execution.

To increase liquidity with a more risk-averse option following security concerns about malicious actors that could attempt to take control of the PoolTogether treasury at a profit, as well as obtain yield with idle treasury funds.

This proposal seeks to deposit 600k POOL on Bancor, contingent on POOL being whitelisted - a process which involves our DAO approving a token to be listed on the platform.

Bancor v2.1’s two main distinguishable features are single-sided staking and impermanent loss protection. These are ideal for treasury stakes as PoolTogether wouldn’t have to deposit any pairing assets in the pool. Furthermore, impermanent loss protection means that the treasury wouldn’t lose value with its stake due to IL - which can be significant as we’ve observed in a recent study Bancor did in collaboration with TopazeBlue [2] [3].

The PoolTogether DAO would stake 600k POOL on Bancor, contingent on a POOL whitelisting proposal passing via the BancorDAO. The DAO should choose on the following:

And many more features such as revamped tokenomics for vBNT, BNT Omnipool (one place to stake BNT), third-party Impermanent Loss Protection, new frontend and auto-compounding fees and rewards.

There will be a migration process from Bancor v2.1 to Bancor 3, which will go live in the next couple of weeks. To incentivise migration, we’re running a dual LM campaign which might be of interest to the PoolTogether DAO:

Feel free to ask any questions!

Hi @tfns! Welcome to the PT forums. I appreciate you stepping up to share your product.

This PTIP is attempting to supercede PTIP-61 which provides single-sided liquidity to Uniswap, so I’ll explain some reasons why I prefer Uniswap.

This is attractive because:

This is in sharp contrast to Bancor, which has ~$500k in volume per day for USDC and $7.7m per day for Ether. Bancor is not yet available on Polygon.

We’ve already discovered how challenging it can be working with a slow-moving treasury. Interacting with protocols can be complicated, and if there is an associated business deal that needs to be managed then there is a massive human component to it.

PTIP-54 was going to use Notional, but the challenge in actually depositing prevented us from using their system.

PTIP-45 created a liquidity-as-a-service partnership. To close out the program successfully there has been a ton of out-of-band communication with the Ondo and Fei teams. Taking on any kind of special arrangement with another protocol requires a protocol account manager of sorts, one from our community who represents our interests. Our Treasury Working Group researches protocols and programs, perhaps they could speak more to this.

I think Uniswap is a more prudent choice for liquidity provision by the treasury. This PTIP attempts to oppose that proposal, so I cannot support it.

Hey @Brendan thank you for the response, appreciate the feedback! You are right, this PTIP was attempting to supercede PTIP-61 but it doesn’t have to be. If the PoolTogether DAO wishes to, we can experiment with depositing a smaller amount of POOL tokens on Bancor 3.

I was prompted to write this proposal by a PoolTogether community member as I was made aware that the Olympus Pro and FEI agreements didn’t work as well as intended.

I’ll try to address your points in the best way I can to provide some transparency. Again, I’m more than happy to iterate on the proposal to get it to something you’d like to do as a community, or even drop it if it isn’t a commitment you wish to pursue at the moment.

Uniswap is on both Ethereum and Polygon. We can send users to one dapp for both networks.

This is true and a good point, we’re currently only on Ethereum as we’re launching Bancor 3 which will be multichain. The decision to move to another chain will be a DAO decision but totally understand - if you wish to deploy liquidity on both chains as soon as possible then we are not the solution for it. However, on Ethereum, Bancor is a much more transparent and straightforward liquidity provisioning experience.

We’ve already discovered how challenging it can be working with a slow-moving treasury. Interacting with protocols can be complicated, and if there is an associated business deal that needs to be managed then there is a massive human component to it.

The pools on Bancor need the underlying tokens to be whitelisted before being traded - this is a design choice as we protect against Impermanent Loss. There is no business deal however - the whitelisting process for Bancor 3 is:

Again, anytime the DAO wishes to add/withdraw after the pool has been whitelisted, it can do so. No need for an account manager to handle it. If we have a POOL pool on Bancor, I will update the Treasury Working Group whenever proposals that affect the pool are being discussed.

We’ve already discovered how challenging it can be working with a slow-moving treasury.

I’d just like to emphasise how Bancor’s passive LP experience is much more friendly for slow-moving treasuries. No need to adjust ranges, can add/remove liquidity anytime, fees and rewards auto-compound in the pool, and LP tokens that would represent POOL single-sided staked with no IL downside.

Finally, our dual LM rewards matching campaign means that any POOL tokens worth up to 50,000 BNT committed for rewards are essentially 2x as efficient.

A Bancor community member has posted a proposal on the Bancor governance forum to whitelist POOL with 100k BNT trading liquidity limit, which would allow space for roughly 50k POOL to be staked single-sided:

The proposal on Bancor governance has passed.
There is now 115K of single-sided $POOL capacity available for staking in Bancor.

I support this proposal, we need more liquidity and if we can get it single sided, IL protected and earning fees, then I see no real downside.
Bancor now already added POOL Token and I think governance could use some funds to add liquidity there.
Thx @tfns and Glen (from Discord, idk if you are also here in the gov forum).

Thanks for putting this thread together. I had brought up the onboarding proposal which was linked by the OP to the Bancor governance recently and it passed the DAO vote.

As both @Lonser and @Tjark mentioned, there is roughly ~115K of single sided liquidity available on Bancor for the $POOL token this amount is a starting point since the proposal requested for 100K in $BNT trading liquidity and can be expanded upon as needed.

A quick note that Bancor doesn’t require pairing with $ETH or another base token and hence is more capital efficient as we are doing that with protocol owned $BNT. More importantly, you are also not exposed to any IL as we provide 100% impermanent loss protection if you stay in the pool for 100 days (in version 3 of the protocol launching next month this is instant but has a 7 day cool down period at withdrawal). Some quick stats from apy.vision : 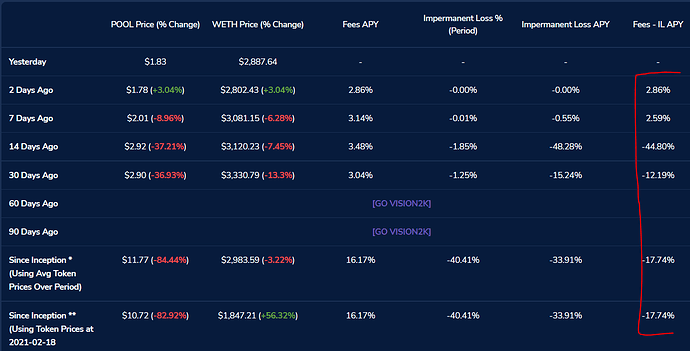 for the $POOL/$WETH pool that shows IL depending on when you started your LP position.

I couldn’t add that many links since I am a new user but wanted to highlight an article discussing some of the most recent deposits from DAO treasuries into Bancor: 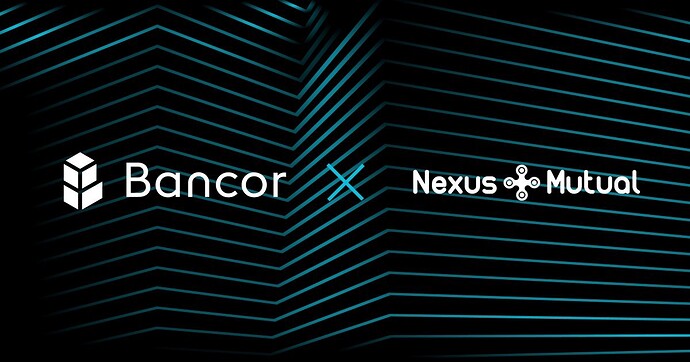 @Brendan Is it possible to edit the proposal to change the POOL allocation to 100k POOL? We’ve opened space for 115,214 POOL from our end. The space can be increased if the pool is full, via a proposal being passed by the Bancor DAO.

Of course! I also think it’s a much more reasonable number.

Since you’re pushing this forward, I want to stress a few more things:

This is key. We don’t currently have any Bancor experts or people from our community who can champion and manage the position, so it will be essential to have yourself or other personnel guiding us.

On that note, you need to add the technical details of how the dao enters the LP position. You’ll have to do so anyway to create the proposal.

PTIP-72: single-sided POOL staking with IL protection on Bancor (former PTIP-64) Summary Following PTIP-61 and concerns expressed over the value held by the protocol’s treasury being higher than POOL’s market cap, proposal PTIP-64 sought to deposit 600k POOL tokens on the Bancor POOL pool. This proposal comes as result of discussion between the community and core contributors of Bancor and PoolTogether: The staked amount has been reduced from 600k POOL to 100k POOL. Dual LM rewards informa…

This is key. We don’t currently have any Bancor experts or people from our community who can champion and manage the position, so it will be essential to have yourself or other personnel guiding us.

On that note, you need to add the technical details of how the dao enters the LP position. You’ll have to do so anyway to create the proposal.

Hope the technical details of PTIP-72 are sufficient, happy to expand if needed.

We’ll inform the PoolTogether DAO whenever there is a trading liquidity limit change, fee change or any other proposal affecting the POOL pool.